We landed just outside of Kansas City in a county park with huge sites and a lot of green grass.  We were able to sit out the first night and enjoy the outdoors but we soon remembered we were in the midwest in June because it was humid.  The skies were threatening us all three days.  We even woke up one morning to a huge thunder and lightening storm.  We quickly read up on tornadoes and their warning system and realized we were in an area that had a tornado warning in effect.  Not to worry, however, I had located a close by bathroom area that was made with brick and was convinced it would be a better spot than the trailer!  No tornadoes so far…

We started being tourists at the WWI monument and museum which was spectacular.  Did you know:  there were 35,000 miles of trenches dug across the Western front in 1917, that one out of three French men between the ages of 18-30 died by 1917, that five million civilians perished as a result of war, and that 8,364,700 people in all died during this war?  This is a must see memorial and museum to anyone visiting this area.

We hung around the downtown area all day and stopped by the Union Station seen in the front of the picture above.

We also found the confluence of the Kansas and Missouri rivers and visited the park.  Here we found more information on Lewis and Clark  and the muddy rivers. 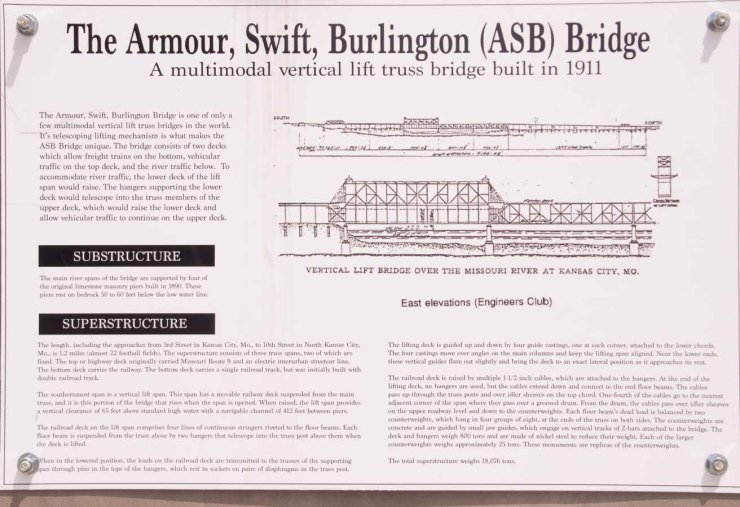 Mike took some great evening shots of the downtown area and, of course, we had our share of BBQ.

We found a top ten list of BBQ places not to miss and we were able to make it to three.  I guess that means we will have to come back here someday.  The food is delicious but they serve everything with fries and there is never a salad to be found.  Probably not a good long-term solution to a  healthy lifestyle!  Speaking of a healthy lifestyle, we also went on a distillery tour.  We learned a lot about Tom Pendergast, a complex local political boss who controlled Kansas City from 1925-1939.  They say he was complex because he is credited with many humanitarian deeds as well as helping to grow the city along with all the strong-arm tactics that kept him in power.  The distillery is named after him and they are distilling some great alcohol.  We may have bought a couple bottles to bring with us.

Finally, we made it out to Independence, Missouri, home of President Harry S. Truman.  They have a huge courthouse sitting in the middle of the square and you can even go into the soda fountain where Truman had his first job.  Independence is also known as the launching off point for the Santa Fe, Oregon, and California wagon train trails.  They have a museum with all kinds of artifacts and first-account passages from travelers.   It is next to an old, refurbished railroad depot that is full of antiques.  Kind of cool to see both ways the West was opened up right next to each other–the wagon train trail and the train.