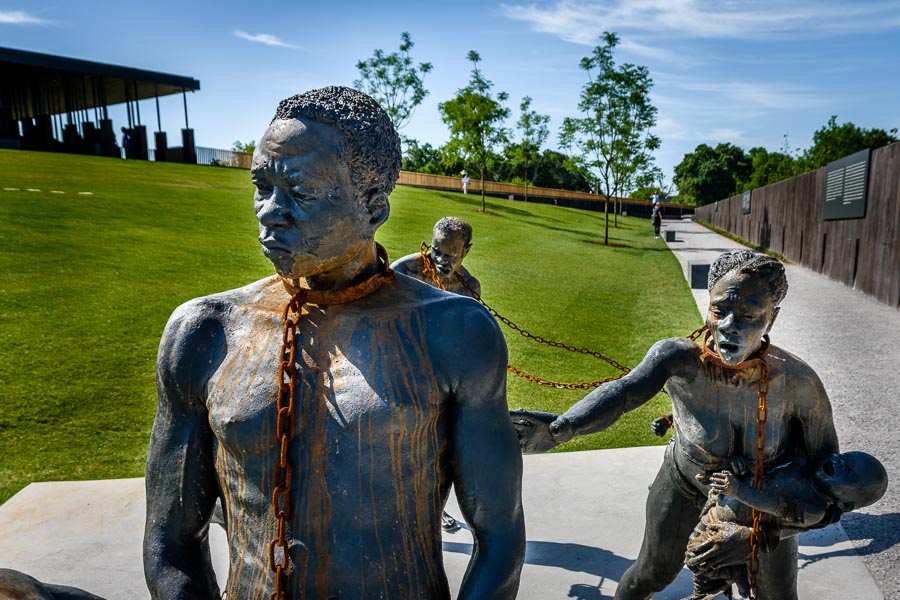 National Memorial for Peace and Justice

When we started planning this trip, Mike worked up a preliminary itinerary and he would ask for my input.  I always just said, “That sounds great!” I liked all of his ideas.  Everything was somewhere I hadn’t been and I knew we would like it.  When we got to planning our visit to the South I had my first suggestion.  I really wanted to go to Montgomery, Alabama.  We used to read an article in 5th grade that introduced the students to Maya Lin, a designer, architect, and artist who created the Vietnam Memorial in Washington DC at the age of twenty-one.  She also created the Civil Rights Memorial in Montgomery, Alabama and I had always thought it was a place we should visit.

Of course, Mike went along with my plan and we ended up here for two days that neither of us will ever forget.

The Civil Rights Memorial was our first stop and it is just like I remember from the article.  The words of Martin Luther King Jr. on the granite wall with the water running down really set the tone.  The circle with the names of so many people, who gave their lives in the struggle also had water cascading.  It is hard to capture the feeling with a photo on this.  Of course it doesn’t hurt that right down the block is the Dexter Avenue King Memorial Baptist Church.

It is built in 1877 in what was a slave traders pen on Dexter Avenue.  This is the church where MLK became the pastor while leading the Civil Rights Movement.  It is just down the street from the capital building and they have put footprints into the street to signify the march from Selma to the capital . 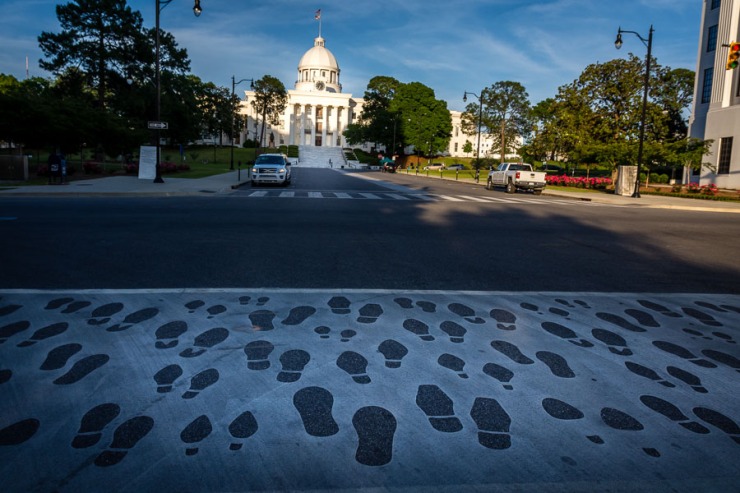 Not bad for day one.

We had been reading about a new memorial which had just opened the week before and decided to go there for day two.  This new memorial is called the National Memorial for Peace and Justice.  I really wish it could be a traveling exhibit for all to see.  The picture at the top of this article is the first statue you see upon entering and it took my breath away.  You continue up a path to an area containing 800 six-foot monuments suspended from poles. 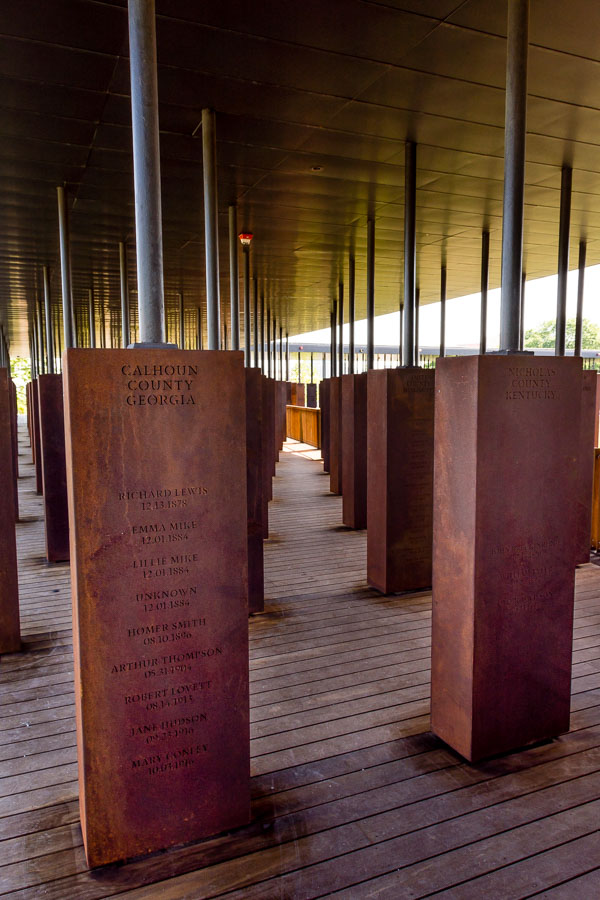 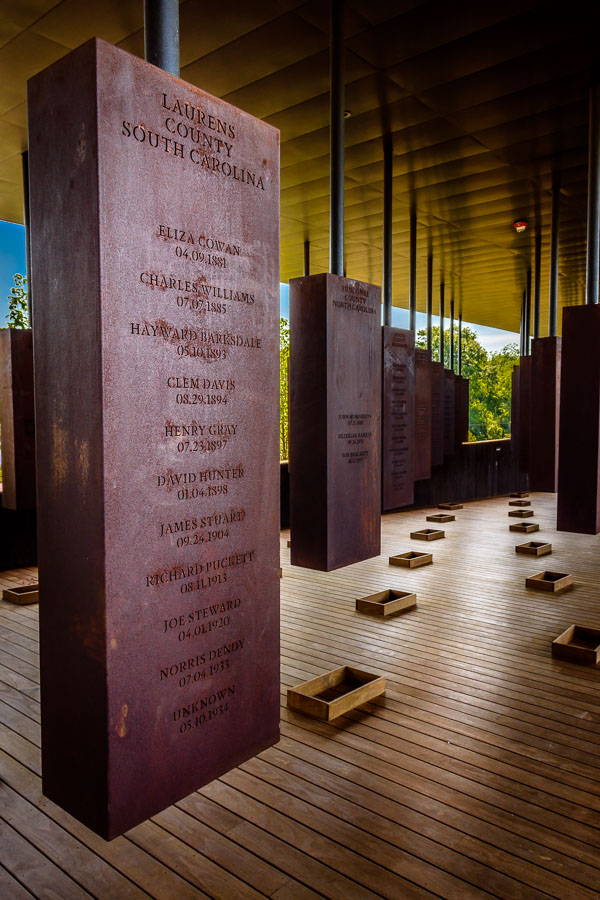 There is one monument for each county where lynchings took place.  They have the names (if known) and dates of every lynching that occurred between 1877 and 1950 on them. There were over 4,400 lynchings altogether.  The path keeps taking you lower and lower down and toward the bottom you are looking up at the monuments as if you are looking up into a tree with bodies hanging down.

It is hard not to cry.  At this point in the exhibit they have also documented some of the specific lynchings with more details. It is moving beyond anything I have ever seen. 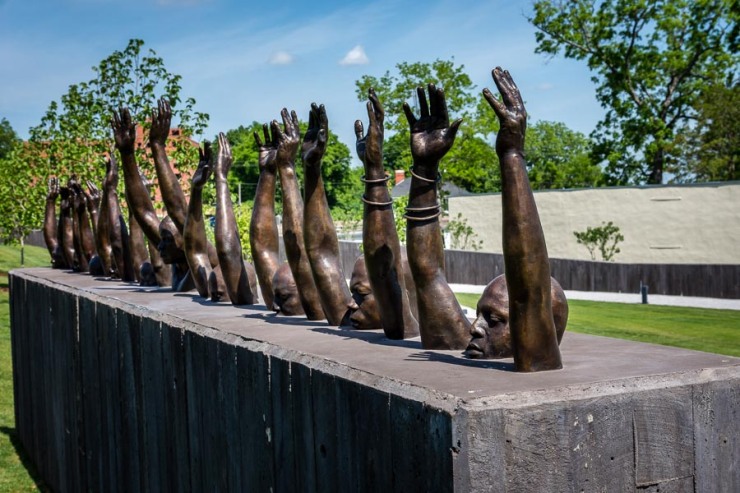 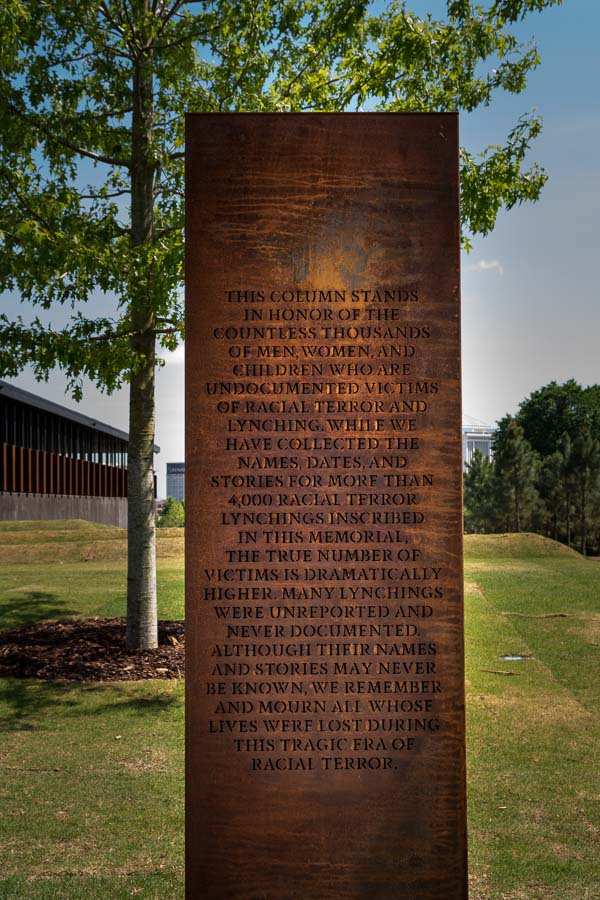 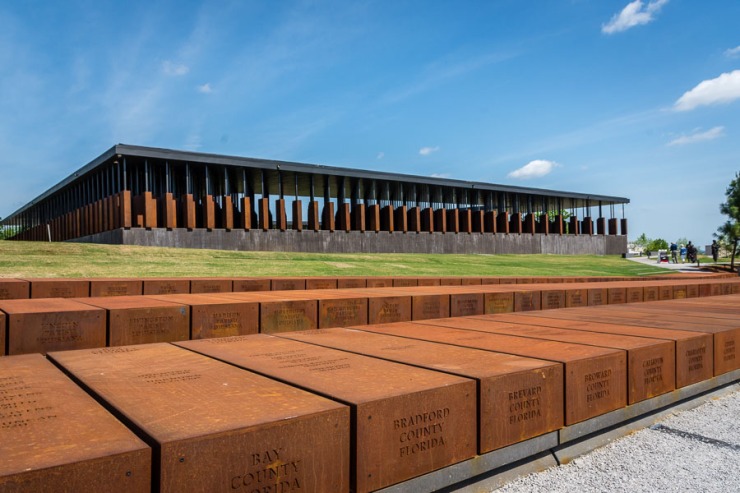 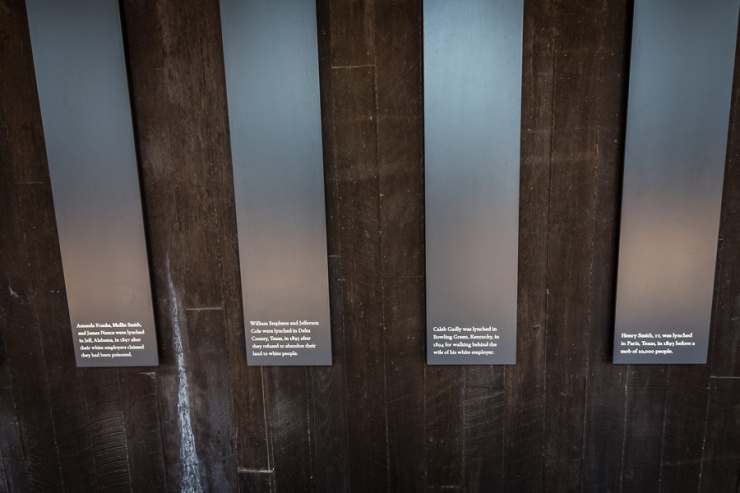 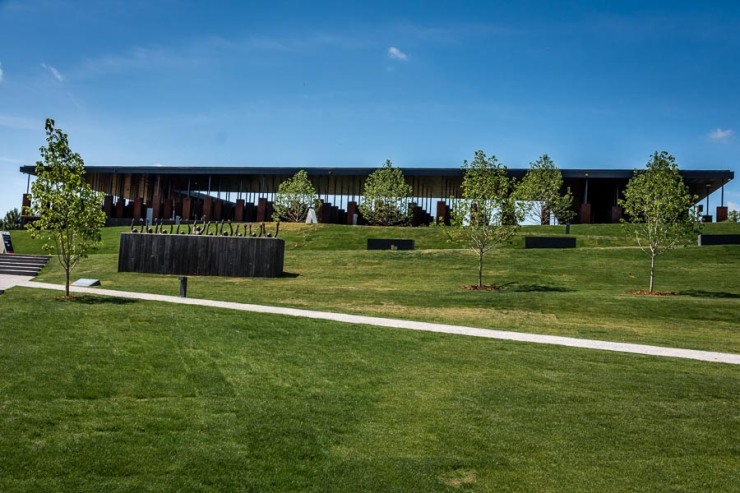 To go along with the memorial, they have opened an exhibit called the Legacy Museum: From Enslavement to Mass Incarceration.  Again, my words cannot do it justice.  This is from the New York Times, “… it demands a reckoning with one of the nation’s least recognized atrocities:  the lynching of thousands of black people in a decades-long campaign of racial terror.”

Mike and I agree that this was one of the hardest but most moving places we have ever been.  Two days in Montgomery, Alabama…